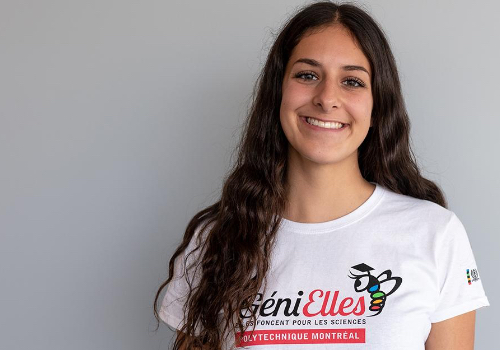 05My name is Béatrice Cyr, I just completed my first year in Engineering Physics at Polytechnique de Montréal. In 2019, I received a Scholarship of the Future from the Ordre des ingénieurs du Québec Foundation. The scholarship was awarded by Kathy Baig, president of the Ordre des ingénieurs, and I was deeply honoured to have the chance to get to know this inspirational woman during the recognition event. She embodies a model of success for all young women looking to build a career in engineering. When I started university, I was awarded the Rio Tinto GéniElles scholarship, and became an ambassador for the program. As a result, I began getting involved with different events aimed at recruiting women into engineering, because it’s a cause that really matters to me. I am also involved in a number of projects where I share my personal journey. Finally, I participate in the tournée Géniale, which involves touring elementary schools in the Montreal area to deliver science workshops. The goal is to introduce children to engineering from a young age, while promoting gender equality within the profession. Through all the ways I get involved in the community, I hope to encourage and inspire young girls to pursue a career in engineering, as Kathy Baig did for me.